Late Wednesday night, H&M made an announcement that’s been a long time coming: customers in the US can now shop online – which means shopping the brand’s upcoming Isabel Marant collaboration is going to be that much easier. The much anticipated collection will officially be the first of H&M’s collaborations to be sold online in the US.

“It’s finally here!” the Swedish retailer wrote in a Facebook post. “Our US online store is officially open in all 50 states. Great fashion is now just a click away!” Around the same time, the brand’s US Twitter account asked its followers, “Who’s ready to shop online?”

H&M said just a few weeks ago that it would be launching ecommerce Stateside in August, but that announcement came after a years-long cycle of repeated promises and delays. After its much-lauded collaboration with Lanvin, H&M said it would launch ecommerce at the end of 2011. Then, in 2012, the brand said in a financial statement that it would have to push the launch back to Summer 2013.

There were rumors that the ecommerce would launch this June, but those turned out to be false.

But none of that matters now: The “Choose Region” page that greets the site’s users now features a little shopping bag next to the link for the US site. The United States joins Austria, Denmark, Finland, Germany, the Netherlands, Norway, Sweden (of course), and the United Kingdom on the list of countries that can shop H&M’s website.

Researchers have found a way to preserve gut health in mice who have been given very high doses of chemoradiotherapy. They say if the same works in humans, it could be a huge step towards treatments that eradicate metastatic cancer… …read more

A team led by researchers at Massachusetts General Hospital (MGH) in Boston has engineered an artificial ear from animal structural tissue and cells. It looks and flexes like a human one and distorts only minimally during growth, thanks to the incorporation of a thin wire frame… …read more

Exercising for 150 minutes each week may be the best treatment for Alzheimer’s, according to a study published in the Journal of Alzheimer’s Disease. Researchers from the University of Maryland School of Public Health conducted the study, which reveals that exercise could improve cognitive function in people at risk of Alzheimer’s by improving the efficiency of brain activity… …read more

A new study from Brigham and Women’s Hospital (BWH) recently analyzed the effects of Bisphenol-A (BPA) on human eggs, and it may reveal why some couples are unable to conceive. The study, published recently online in the journal Human Reproduction, is the first of its kind to show the direct effects of BPA on egg maturation in humans… …read more

For several months, there have been reports of companies, often in the restaurant industry, reducing worker hours to avoid the Obamacare employer mandate penalties. The employer mandate applies only to “full-time” workers, and full-time is defined as working 30 or more hours per week; this potentially gives many employers the opportunity to avoid or reduce the penalty by converting as many workers as possible from full-time to part-time by limiting their work schedule to less than 30 hours a week. …read more

Starting you own band, writing your first novel, or re-publishing your favorite ?80s tabletop RPG are all cool goals. You can do them all on Kickstarter. What would be cooler? …read more

Health officials say breast-feeding rates continue to inch up: Now more than 3 in 4 mothers try to breast-feed their newborns. Rates remain highest in Idaho and lowest in Mississippi, and experts attribute that to regional differences in culture and workplace policies that support breast-feeding. The CDC report shows that… …read more

Move over, models! A laundry list of celebrities have invaded the Fall 2013 campaigns, and they look just as good posing for still shots as they do giving lines to a movie camera. From Michelle Williams, who looks stunning in Louis Vuitton‘s latest handbag campaign, to Sienna Miller and Tom Sturridge in Burberry‘s ads, there are lots of actors who shine brightly in this season’s best ads. A look at the ones that have caused the most buzz, here. 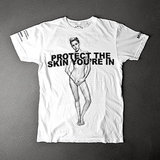 Think there’s nothing scandalous about a plain white tee? Think again! The latest uproar to come out of the shirtmaking industry was today’s decision that Rihanna has won her legal battle against Topshop. The British retailer can no longer produce the tee design printed with her image, which the singer claimed could be misconstrued as official merchandise. The ruling from Justice Birss stated, “Topshop’s sale of this Rihanna t-shirt without her approval was an act of passing off.”

Gone are the days when judge’s chambers were restricted to suits and ties – t-shirts are having their day in court with not only Topshop, but also litigious streetwear from Dolce & Gabbana. The Italian label (which, let’s be honest, has its hands full) is currently facing a lawsuit with Nordstrom. The case was lodged by Peter Fonda, who was none too pleased to see his image on an Easy Rider shirt produced and sold without his permission. We’re spotting a trend here! …read more

How Karlie Kloss Plans to Celebrate Her 21st Birthday It’s Karlie Kloss’s 21st birthday this weekend, and she’s celebrating with none other than a cookie cake – straight from NYC favorite Momofuku Milk Bar – and a frozen margarita “with a little umbrella.” The supermodel sat down with Lucky to chat birthday celebrations, Summer wardrobes, and her recent shoe purchase. Click to read more. 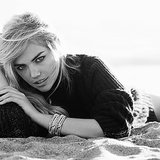 “Through design, styling, and imagery, we tell a story of contrast in all its mesmerizing beauty,” David Yurman said in a statement about the campaign, whose black-and-white images pair classic designs with new ones in a pair of settings that range from a sandy beach to a sleek and minimal studio.

Whether it’s her thickly knit sweater against the dunes of the beach, the opulent jewels against a minimal background, or simply the stark transitions of light and dark in the exclusively black-and-white campaign – David Yurman shows that contrast has never been more beautiful than in this Fall.

The first two ads from Michelle Williams’s Fall 2013 handbag campaign for Louis Vuitton caused so much buzz on their own that it’s only natural to assume the other images will get tongues wagging, too.

The photos, which were shot by renowned photographer Peter Lindbergh, feature Williams posing with the brand’s new W and classic Capucines bags and wearing Marc Jacobs‘s Fall 2013 ready-to-wear collection for the house. The brand said in a statement that it chose Williams for her enduring beauty because she picks challenging roles.

And with talent like hers, this surely won’t be the last time we see Williams in a campaign like this. Get a look at all of her ads here in the gallery.

Was 2013 not Diane Kruger‘s year? Vanity Fair may think so. Among the shocking omissions and additions to the annual International Best-Dressed List, the ultrastylish dresser was excluded after having ranked in 2012.

Which isn’t to say there weren’t some stellar dressers on the list, which happily includes Kerry Washington, Jenna Lyons, Dree Hemingway, Caroline Issa, Lara Stone, Charlize Theron, Stella Tennant, and Tabitha Simmons. Snubs (or decisions construed as such) aren’t uncommon when compiling a list – everyone’s got an opinion, after all – but a few names that appeared (or didn’t) made us sit up and take notice. …read more

Frequent cell phone use may be linked to cancer, suggests a study from researchers at Tel Aviv University, led by Dr. Yaniv Hamzany… …read more

Ever wondered why some women, but not all, have the “pear” shape considered by many to be desirable? Researchers might have found some answers to the mystery, after discovering that estrogen, one of the sex hormones, affects where fat is stored in a woman’s body… …read more

By Marissa Stempien There’s nothing like teetering heels to make you feel like a million bucks—even better if they’re from a luxury designer. Fendi shoes from the current Fall/Winter 2013-14 collection are made from the finest nappa and lizard-printed calfskin to ensure you’…