Nissan CEO Carlos Ghosn always looks like he’s smirking, but with Infiniti delaying a second critical product in a week’s time, we’re sure he’s frowning hard. On Wednesday, Nissan executive vice president Andy Palmer told The Wall Street Journal that the company would “push back the timing” of its Infiniti LE, a luxury electric car based on the Nissan Leaf that was scheduled to go on sale by next spring. A week earlier, Infiniti delayed the launch of its new 2014 Q50 by another month to make engineering tweaks. The LE, first shown at the 2012 New York auto show, may need much more time, although Palmer didn’t specify a ballpark date.

“Certain technologies that we see now, which we didn’t see two years ago, are going to be available in a time frame that was relatively close to where we were going to introduce the Infiniti,” Palmer told the Journal. Our attempts to reach Nissan went unanswered.

An outspoken advocate for electric cars, Ghosn made Nissan the first major automaker to sell a mass-produced EV since the GM EV1. His insistence on pure electric power using an entirely new platform—as opposed to developing EVs and plug-in hybrids from existing models, as Ford has done—means the company needs to sell more EV variants to recoup costs. The Infiniti LE, along with the e-NV200 commercial van, is essential to that plan. But with plug-ins accounting for a half-percent of all market share, no one is betting Nissan—which built a new battery plant in Smyrna, Tennesse, using $1.4 billion in federal loans—will be generating EV profits any time soon. Nor will any automaker, for that matter.

Likely, those “certain technologies”  Palmer refers to involve the SAE fast-charging combo plug, which the company (along with Mitsubishi) continues to oppose despite approval from eight other U.S. and European automakers. Nissan has supported the Japanese CHAdeMO standard for the Leaf, which requires a separate connection as opposed to the SAE’s all-in-one design.

Nissan also may be considering liquid cooling for its lithium-ion battery pack, another feature the company has strongly resisted to cut costs. In September of last year, dozens of Leaf owners in Phoenix told Nissan that the area’s desert heat had prematurely cut their range, with some owners reportedly losing up to 30 percent of battery capacity in less than two years. In April, Nissan responded with a new battery warranty that would offer replacements, although Palmer said at the time that the Leaf’s air-cooled pack did not require further improvements.

Or, Nissan engineers simply could be too busy. They’re preparing a hybrid powertrain for the next-gen GT-R, a car we’d gladly take first over the LE.

In any case, Infiniti’s delay is good news for General Motors, which would prefer its upcoming 2014 Cadillac ELR to have all the electric attention. 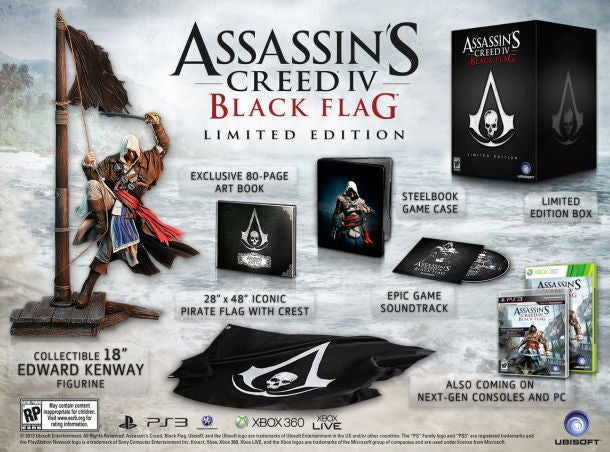 Ubisoft has revealed a $129.99 Assassin’s Creed IV: Black Flag Limited Edition. In addition to a copy of the game, the LE contains the full soundtrack, SteelBook case, an 80-page art book, a 28″ x 48″ pirate flag, and an 18″ statue of Edward Kenway.

The Limited Edition is only available with Xbox 360 and PlayStation 3 versions of Black Flag. Check out the statue and other contents of the LE below, and IGN’s Black Flag wiki has more on international special editions if you’d like to see what other territories can purchase.

When it debuted last year, the Toyota Camry came in for some criticism over its interior, most centered on material choices – both in quality (not enough) and variety (too much). Thus, Toyota has responded after just one model year, updating both materials and features on its gas-powered and hybrid family sedans for 2013.

The LE version appeared to get the lion’s share of the improvements. Specifically, the LE is getting “soft-touch” door materials as well as armrests that match the rest of the interior color (instead of being black). The LE model also gets Toyota’s six-inch display screen that helps folks get a better gander at the car’s energy usage and fuel economy, among other things. Other changes include adding cross-traffic alert for models equipped with blind spot monitoring

Toyota introduced its latest version of the Camry and Camry Hybrid in the fall of 2011 as a 2012 model. Sales have been solid, and in particular, the Camry Hybrid has improved its fortunes, bumping its US sales almost fivefold to more than 45,000 units. So far in 2013, the latter has carried over much of that momentum, boosting January 2013 sales from a year earlier by 81 percent to 3,826 units.

Looking for more details? Toyota happily goes into a ton of detail on the interior improvements in the press release below.

Toyota Camry lineup gets interior and tech updates one year in originally appeared on Autoblog on Thu, 21 Feb 2013 18:30:00 EST. Please see our terms for use of feeds. In response to Senator Dianne Feinstein’s soon to be introduced horribly restrictive, unconstitutional assault weapons ban that assaults the Second Amendment and the private property rights of law abiding citizens, this legislation is designed to provide the framework for a National Concealed Carry Permit to be issued to qualifying adults and allow the unrestricted carry of concealed arms that may otherwise be prohibited by federal, state and local laws. Such places include schools, universities, court houses, federal buildings, and airlines.

States, counties, and local governments regulate the concealed and open carry of firearms. The Federal Government has protected some places as firearms-restricted areas. This has restricted the ability of law abiding citizens to protect themselves and others. It has created gun-free zones that have become targets for terrorists, murderers, rapists, and robbers.

This act will supersede the local or state government’s authority to restrict the carrying of firearms and enhance the security of citizens within these areas and establish standards that go beyond the average citizens’ ability to carry concealed firearms. This act would create an armed citizen militia designed for the sole purpose of protecting the citizenry from heinous acts of violence.

Not everyone will be qualified or make the commitment to the process of obtaining a permit. The selection process should seek out the individual who has the mental ability and sound judgment to intercede in a situation where they may be called upon to take a human life in the defense of another. This is a significant point as most citizens carry firearms or seek concealed carry permits for their own protection and may be hesitant to intercede on behalf of another.

National organizations that have a demonstrated record of providing firearms training could be utilized to train or assist in the training of these citizens.

This legislation is intended to elicit thousands of volunteers who are trained and willing to use a firearm in defense of themselves and innocent victims on a national level.

This act encourages the states to pass “right to carry” legislation and continue to issue concealed carry permits for their citizens. Expansion of legal concealed carry rights and citizen militias within each state will further prevent crime and establish a safer society.

During natural disasters, emergency personnel and law enforcement can be quickly overwhelmed as efforts are maximized towards the disaster relief effort, leaving citizens to fend off looters, robbers, and rapists. An armed citizenry is usually the first and sometimes only line of defense.

The Federal Concealed Carry and Mass Murder Prevention Act of 2013

Purpose: Establish a means by which selected citizens could apply and receive federal authorization to carry a loaded concealed firearm on their person, for the explicit purposes of self protection and preventing terrorist activities and mass murder, allowing permit holders to carry concealed in places and institutions where firearms are generally prohibited, and promote the legal use of firearms and the safety of citizens.

Here is the framework of this legislation:

• The “federal agency” shall appoint an office within each jurisdiction for the processing and administration of this program.

• The “Federal Agency” shall oversee the use of force and assemble shooting boards to examine and make determination whether use of force was justified.

• Permit holders will be required to submit data detailing when, where, and how often they carried concealed so as to direct recruitment efforts in geographic areas of the country with insufficient numbers of persons carrying concealed.

• Permit holders will immediately report any use of force.

• Permit holders will be held harmless from civil liability and criminal prosecution if the shooting review board determines that said permit holder acted in good faith and in accordance with use of force training and standards.

• Permit holders shall carry their permit on their person at all times when carrying a concealed firearm.

• Permit holders will bypass TSA screening at all airports and be recognized as sky marshal status aboard commercial aircraft.

• Each member of the military shall carry a side arm or long gun while in uniform.

• Each state shall develop a plan to train citizens in firearms responsibility and encourage the appropriate use of firearms for the purpose of self-defense.

• Permit holders can have their permits revoked at anytime.