While the second episode of Hannibal did introduce a new “killer of the week”, I was also very happy to see plenty of fallout from what occurred in the pilot, as it became clear there was no easy “well, that’s all over” procedural vibe here.

The fact that Will Graham had never killed someone and had “just pulled the trigger ten times”, as Jack put it, was not dealt with lightly. Not only did we see Will troubled by nightmares about what he’d done, but it was the reason Jack asked Will to get a psych eval – from none other than Hannibal Lecter.

The dynamic between Jack and Hannibal is great, as Hannibal established an easy, friendly, no BS tone with Will – “rubber stamping” him, officially, so they two could be more genuine together. At the same time, he’s baiting Will with dark questions like, “Is it hard imagining he thrill someone else feels killing, now that you’ve done it yourself?” Hannibal clearly finds Will someone worth his time – does he want to cultivate the darkness he sees within Will? By the end of the episode, he has Will admit “I liked killing him”, as they discuss the feeling of power that goes along with taking a life.

Advance Review: On the surface, Hannibal has so much going against it. A prequel TV series about Hannibal Lecter has to overcome a lot of preconceptions, starting with the intimidating shadow of anyone daring to stop into the shoes of Anthony Hopkins, who gave such an iconic (and Academy Award winning) performance in the role. Then you have the fact that some would say the character was arguably diminished by perhaps less than stellar cinematic follow-ups to the classic The Silence of the Lambs, including Hannibal Rising – which was itself a prequel! Oh, and by focusing on the relationship between Lecter and Will Graham, Hannibal invites the, “This story again?” cries, given the Lecter/Graham dynamic was explored in two previous films; Manhunter (with Brian Cox and William Petersen) and Red Dragon (with Hopkins and Edward Norton).

Using the movie terminology of calling it a “red band trailer,” this latest look at Hannibal is the longest and most graphic preview yet for NBC‘s new series. The new take on a younger Hannibal Lecter and his relationship with profiler Will Graham, Hannibal comes from Bryan Fuller (Pushing Daisies, Wonderfalls).

My review is coming in the next few days, but I can tell you this is one cool, edgy and twisted show. As this trailer hints, Hannibal doesn’t feel at all like its holding back, despite airing on network TV.

With an April 4th premiere date finally announced for Hannibal, NBC have released the first promo for the new take on Hannibal Lecter.

Award-winning ad man-cum-auto journalist Don Klein knows a good (or bad) car commercial when he sees one; the Ad Section is his space to tell you what he thinks of the latest spots. The ad’s rating is depicted via the shift pattern at the bottom, but everyone has an opinion when it comes to advertising, so hit Backfires below and tell us what you think, too.

Remember the animated Prius commercial? That charming little cartoon with sunny blue skies and the nursery-rhyme jingle? Well, this commercial is that commercial’s cosmic antithesis. The scenery here is about as sunny as Caligula’s heart. You won’t hear any cutesy humming, just an edgy, nails-on-the-blackboard soundtrack and the basso thumping of a big-ass (6.2 liter) pushrod V-8 that spews out 450 horsepower and 450 lb-ft of torque. Because the 2014 Corvette Stingray isn’t a hybrid—it’s a thoroughbred. Sorry, Prius, but this is the car that wants to have fun.

It’s hard to recall a new model introduction that’s had more hype and anticipation than the 2014 Corvette. And while many folks haven’t experienced the C7 in person yet, we’ve all seen the photos, read the articles, and followed the news. This 28-second, web-only commercial’s job is to build on that hype, to take it (and you) to the next level by plunging you deeper into Chevrolet’s multi-platformed marketing program. And it does. Like a good aperitif, it heightens your senses and makes you hungry for more. Like the car itself, the spot moves fast. I love the way it opens, allowing us to catch only glimpses of the shiny (sweaty?) car-as-beast, confined in a space that looks like a cross between a paint booth and Hannibal Lecter’s glass holding cage. This is one BAMF, as both the darty camera (Whoa! Don’t get too close there Buddy, that thing’ll bite ya!) and growl-packed soundtrack attest.

And the decision to shoot it in black and white isn’t because they couldn’t afford color film. Fifty shades of gray are all the better to show off its sexy flanks. Once safely ensconced in the cockpit, we’re off to the track to get it on. Fast? Check. Loud? Check. Any questions? Didn’t think so. Even if you’ve got a blue oval or a fanged snake head tattooed over your heart, this commercial gets you pumped and you know it.

I think one reason why the spot does its job so well is because it never lets you get a good look at the complete car. In the 20 seconds it takes to reach the supers at the end, they’ve crammed in 21 scenes. That comes to about two eye blinks per cut, which isn’t much time to register a clear impression, especially when most of the scenes themselves contain movement. In fact, the whole spot seems to rush by in about half its actual running time. And although I certainly wouldn’t have minded if they’d lingered on the car shots longer, the quick cuts are key to helping …read more
Source: FULL ARTICLE at Car & Driver 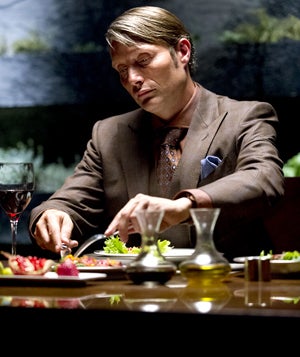 At last, we know when Hannibal will be sitting down to feast, as an April 4th premiere date has been revealed for the new take on Dr. Hannibal Lecter.

#Hannibal Requests the Honor of your Presence for Dinner Thursday April 4 10PM @nbc — Saving you a place at the … tmi.me/KwHCB

Developed by Bryan Fuller, Hannibal offers a contemporary take on the classic characters from Thomas Harris‘ novel Red Dragon. FBI agent Will Graham (Hugh Dancy) and Hannibal Lecter will be re-introduced at the genesis of their budding relationship. Graham, who is on the search for a dangerous serial killer, enlists the help of Dr. Lecter, a brilliant psychiatric mind, with no clue of the doctor’s darker side.