SAN DIEGO — Moviegoers were ready for a fright this weekend, sending “The Conjuring” into first place at the box office.

The Conjuring won’t hit theaters until July 19, but New Line is already lining up a sequel to James Wan’s horror pic.

Set in 1971 Rhode Island, The Conjuring is inspired by the work of real-life paranormal investigators Ed and Lorraine Warren, played by Patrick Wilson and Vera Farmiga, respectively. Ron Livingston and Lili Taylor portray a father and mother of young daughters who were plagued by a haunted house.

“Horror is very much a part of the DNA of New Line — Nightmare on Elm Street, Friday the 13th, The Rite, and the Final Destination films,” said New Line president Toby Emmerich. “This is as good a horror movie as we’ve ever made… We think it will have great playability.” 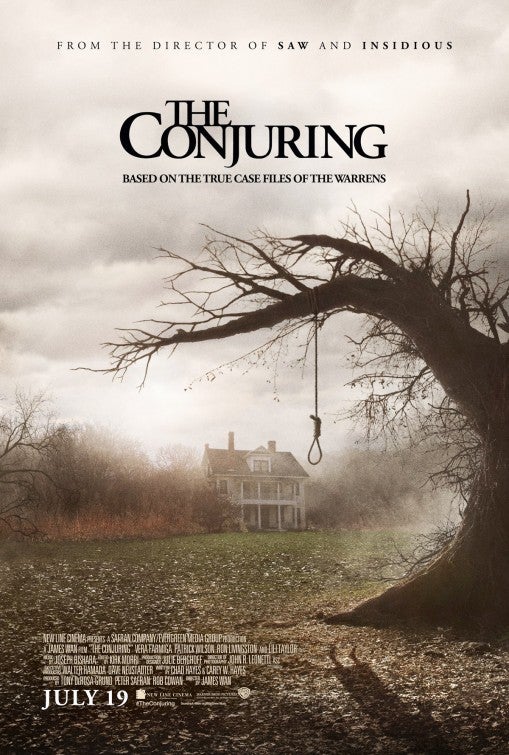 Director James Wan (Insidious, Saw) was at WonderCon on Saturday to debut new footage from his upcoming horror film The Conjuring.

The fact-based horror film recalls the most terrifying case legendary husband and wife paranormal investigators Ed and Lorraine Warren (Patrick Wilson and Vera Farmiga) ever encountered. Set in 1971, the film involves a family (led by Lili Taylor and Ron Livingston) whose farmhouse is haunted by a witch’s spirit. This is a forerunner to The Amityville Horror — the case that made the Warrens famous — and it touches upon the religious conflict between God and demons.

The first sequence screened showed Lili and her daughter playing a game of blindfolded hide-and-seek that culminates with Lili’s first realization that something just ain’t right in her home.As the sequence progressed, she hears a strange clapping sound that she believes is from her children playing past their bedtime, but obviously that’s not it. Her investigation into the strange sounds leads her to make a very unwise trip to her cellar, a decision that got the crowd riled up and shouting at the screen for her to not go down there. Fun stuff.

Can men and women be friends? That eternal question, best asked by Nora Ephron in “When Harry Met Sally,” takes center stage in Joe Swanberg’s new film “Drinking Buddies,” which premiered at the SXSW Film Festival on Saturday night.

Starring Olivia Wilde, Jake Johnson, Anna Kendrick and Ron Livingston, “Drinking Buddies” focuses on two couples, Luke and Jill (Johnson and Kendrick) and Kate and Chris (Wilde and Livingston), and the too-close-for-comfort relationship between drinking buddies Luke and Kate, co-workers at a Chicago brewery. There’s beer drinking, more beer drinking, even more beer drinking and lots of intriguing drama about what is worse for a relationship: physical affairs or emotional ones. As is Swanberg’s style, “Drinking Buddies” is unscripted; instead of writing a screenplay, Swanberg discussed the characters and story with his talented cast and filled in the blanks during the editing process.

“Typically, if you’re working from a script you’ve written a joke or moment on the page, and it’s really hard to tell if it’s landed.” Swanberg, best known for making films that fit into the indie sub-genre of mumblecore, said during a post-screening press conference. “You have to rely on the fact that you knew it was a funny joke when you wrote it and then, in the context of the movie, that it will land. This way, I’m watching it as a viewer; I’m watching it unfold. Then I know what’s working and not working.”

Jeffrey Wright is heading to “Boardwalk Empire.” Deadline.com reports the veteran film actor will join Season 4 of HBO‘s prohibition-era gangster drama as Valentin Narcisse, a “Doctor of Divinity” and philanthropist who controls Harlem.

In other casting news …