Poor Anakin Skywalker: First he turns into Darth Vader, and now his childhood home is about to be eaten by a wind-blown sand dune. The Tunisia set for the Tatooine city of Mos Espa in Star Wars Episode I: The Phantom Menace is expected to soon be buried by the… …read more

Happy birthday, MC Hammer! Stanley Kirk Burrell turns 50 years old today, making his greatest contribution to dance party music and karaoke lists everywhere a whopping 23 years ago. No, we’re not talking the metallic harem pants, but his music: The fast-moving, insanely catchy “U Can’t Touch This” was first released in 1990, off the rapper’s album “Please Hammer, Don’t Hurt ‘Em,” and probably continues to haunt him everywhere he goes (kidding … sort of).

In honor of Hammer’s half-century birthday, we’ve found the best and worst videos paying homage to his hit single.

Fit in four minutes. It sounds like a hyperbolic headline from a buffed-up health magazine; an unattainable promise uttered through Hollywood teeth on late-night satellite TV. Then you attempt Dr Izumi Tabata‘s training protocol – 20 seconds of all-out effort, 10 seconds of rest, repeat eight times – and between sounding like Darth Vader as you desperately suck in oxygen and collapsing in a messy bundle of sweat and defeat, you realise just how wrong you were.

Award-winning ad man-cum-auto journalist Don Klein knows a good (or bad) car commercial when he sees one; the Ad Section is his space to tell you what he thinks of the latest spots. The ad’s rating is depicted via the shift pattern at the bottom, but everyone has an opinion when it comes to advertising, so hit Backfires below and tell us what you think, too.

In 1959, Volkswagen ran a print ad with a photo of a Beetle and the tagline, “Think Small.” Its simplicity and compelling logic made it a watershed event that changed not only the face of car advertising, but advertising in general. It received so much attention that it put both VW and its agency (Doyle Dane Bernbach) on the map as the standard bearers of advertising creative excellence. In the ensuing 50-plus years, VW has continued to give us many memorable breakthrough ads, culminating in 2011’s wonderful “Force” commercial, which featured a mini Darth Vader having a close encounter with his father’s Passat.

Two years later, you can still find that spot at the top of almost every “Best Commercials Ever” list because it deserves to be. So I find it surprising that VW decided to make a new father-son Passat commercial. Did it really think it could outdo “Force” with this boring portrayal of an inept father teaching his son how to throw a baseball? And given the legacy and challenge of maintaining VW’s high creative standards, this is the best it could do to communicate the Passat’s durability?

The storyline is appealing enough—despite their mutual lack of athletic ability, a young dad encourages his son to improve his ball-tossing skills by trying to show him how it’s done. If more fathers invested this type of interest in their kids, the world would be a better place. Ironically, except for the fact that they’re trying to sell you a car, the payoff line is admirable: “Pass down something he will be grateful for.” If that “something” referred to the life lesson this supportive father is demonstrating, I’d say it’s a great spot. But instead, the creative team uses it as a straw dog to set up the commercial’s real message: Your kid won’t appreciate your teaching him to throw like a dork, but you can make up for it by giving him your hand-me-down Passat when he gets old enough to drive.

Junior looks to be somewhere between eight and ten years old, so depending on where they live, this baton-passing should take place in the next six to eight years. Will the now-new Passat still be roadworthy by then? Hard to say—all it does in the commercial is sit in the driveway. It doesn’t even deflect one of the kid’s off-target tosses. Although durability is ostensibly the point of the commercial, the only evidence it gives …read more
Source: FULL ARTICLE at Car & Driver

The seven-footer got the team dance started wearing not one, but two masks while the rest of the team works out (at least some of them are) in the weight room. Then the costumes come out.

The Nuggets went with a fake snake, a Darth Vader costume, some wigs and a mask used in that move “Scream.”

Not much may be able to stop Darth Vader in the fictional “Star Wars” universe, but in Ukraine, apparently all it takes is a few security guards.

On Tuesday, an individual dressed as Darth Vader and accompanied by a coterie of Stormtroopers marched on the Ukraine’s Justice Ministry and demanded recognition for the Internet Party of Ukraine.

In a video posted on YouTube, Vader and his Stormtroopers are seen approaching the entrance of the Justice Ministry and ordering the security guards to open the doors “In the name of the Emperor,” according to a translation by Russia Today. Surrounded by photographers and curious onlookers, the costumed gang are denied entrance and forced to step outside. 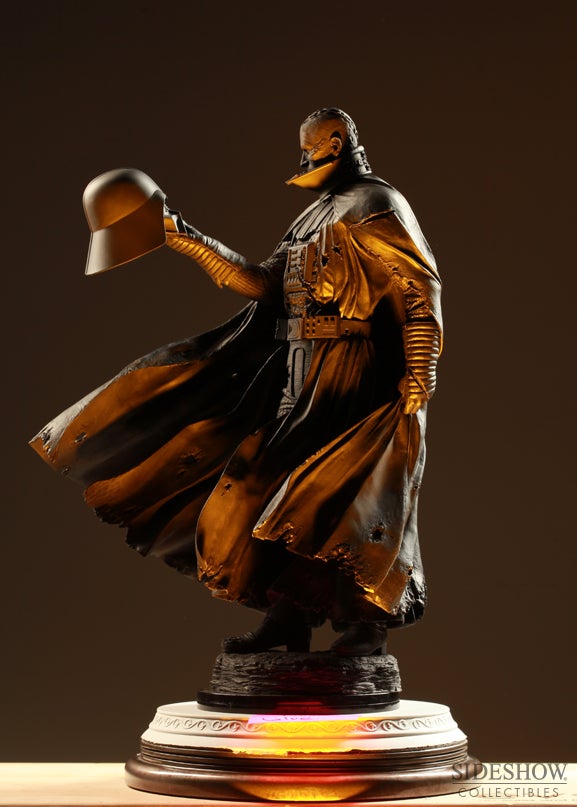 With as many companies as there are producing Star Wars collectibles these days, it takes a lot to stand out from the crowd. The goal of Sideshow Collectibles‘ new Star Wars Mythos line is to offer creative, artistic takes on familiar Star Wars characters and deliver the ultimate high-end statue. The company recently revealed some new images of the fifth, and quite possibly best, entry in the line – Darth Vader.

By Carol Pinchefsky, Contributor Star Wars: Return of the Jedi ended on many happy notes: The rebels won. The second Death Star was destroyed. Darth Vader killed the Emperor and forswore the Dark Side. But just because the ending was happy doesn’t mean everyone was happy about it. YouTubers HISHEdotcom believe that they have the ending that makes the most sense to them.
Source: FULL ARTICLE at Forbes Latest A man in a bunny costume wields a purple bat

Super Bowl advertising can chew up a sizable portion of any company’s marketing budget, but the end justifies the means. If you can make your commercial stand out above the rest, chances are good that many millions of viewers will take note and, potentially, remember your product when shopping.

Automakers have a long history of advertising during the Super Bowl, and sometimes it pays massive dividends. Remember Volkswagen’s ad with the pint-sized Darth Vader? It was the sensation of the 2011 Super Bowl, and it was getting hits long after the game was a memory. On the other hand, does anyone remember Suzuki’s Kizashi ad from last year, with a car full of sled dogs?

This year, Mercedes is hoping that swimsuit model Kate Upton will be a hit, while Lincoln and Audi are letting fans direct the ad’s message. Volkswagen is going for a more down-home approach, with owners relating VW stories, while Hyundai will try to show that your car is your buddy.

Toyota, on the other hand, is borrowing a page from Kia’s 2012 Super Bowl playbook, and going for the weird factor. In the teaser video above, Kaley Cuoco from CBS’ The Big Bang Theory strolls the streets of an anonymous city, bedecked in purple, granting wishes to the people she passes. We’d caution you to be careful what you wish for, since who really wants to wander around in the form of a giant ogre? Would you throw the flag for “excessive use of purple” as quickly as we would?

What’s your take on this? Will weird sell, or is Mercedes taking the right approach by showing as much skin as it can? Will VW’s feel good ads be memorable, or are they off-target this year?